Michael Beutler’s diverse expansive interventions transform spaces and places into seemingly fantastic architectural structures and environments. The starting point of his art is made up by the machines conceived by the artist himself – self-made devices ranging between specialised tools and autonomous sculpture – that execute simple such procedures as folding, winding, printing and weaving. Paper, metal, wood and plastic are among the materials that are shaped in this way into sculptural modules. They are the components with which Beutler and his assistants assemble constructions that are simultaneously complex and fragile and whose visionary ambition sometimes recall early modernism’s crystal palaces or cave-like ‘MERZ buildings’.
Beutler’s installations can be read as utopian labour and living models that question traditional concepts of the work and its means of production. Participation represents a central principle behind his work, which he accordingly produces on-site in collaboration with others. Machines do not replace human work here but enable alternative collective methods of production. The open dynamic work process is defined by improvisation to the extent that planning and chance are of equal significance in the development of his pieces. Beutler’s temporary interventions are not subject to a predetermined notion of utilisation. Instead, they open up alternative perceptions of space and courses of action to the public, which is invited to participate in the process.
Michael Beutler (born in Oldenburg in 1976, lives and works in Berlin) studied with Thomas Bayrle at the Städelschule in Frankfurt from 1997 to 2003 as well as at the Glasgow School of Art from 2000 to 2001.

The exhibition was curated by Dr. Astrid Ihle. 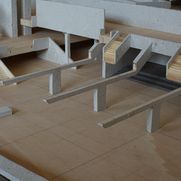 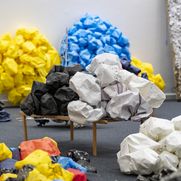 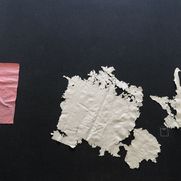 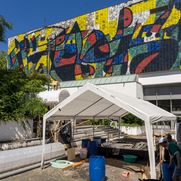