The unmistakable emblem of the Wilhelm-Hack-Museum is the ceramic facade by the Catalan painter and sculptor Joan Miró from 1979. It consists of the 7200 ceramic tiles and with its width of 55 metres and a height of ten metres, it is one of the artist’s largest works.

The origins of the wall go back to a construction flaw. As opposed to the original plans, the museum had to be raised about four metres. The resultant exterior surface grew in size and ultimately cried out for a work of art.

To this end, the head of the cultural affairs office, Hanns Astheimer, museum director Dr Manfred Fath and mayor Dr Werner Ludwig approached the artist in 1977 and asked him for a design for the external facade. Miró decided on a ceramic facing in 1978, which was ultimately produced in close collaboration with the ceramist Joan Gardy Artigas.
The two artists transferred the design produced on a scale of 1:10 to 20x36 cm large stoneware and kilned in especially made firing furnaces in the tiny mountain village of Gallifa near Barcelona. After initial difficulties in importing the tiles to Germany, the glazed stoneware tiles were finally transported to Ludwigshafen in November 1979. The mural was completed in late 1979. 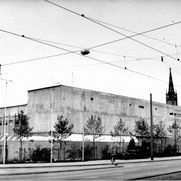 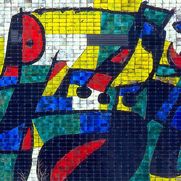 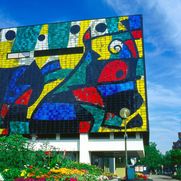