In 1977, the Ludwigshafen painter Rudolf Scharpf (1919 – 2014) donated his home in his native city’s tradition-rich Hemhof district on condition that it be used as a venue for the presentation of young art. The Rudolf-Scharpf-Galerie is today still the Wilhelm-Hack-Museum’s newest space for contemporary art projects and exhibitions.
As an artist, Scharpf is specially known for the extensive body of woodcuts he produced since the 1950s in which he adapted contemporary structures and demonstrated an ability to assimilate modern means of expression. Although not as well known as his woodcuts, Scharpf also dedicated himself to painting, which especially played an important role for the artist in his later works. His paintings are not antithetical to the strict linearity and practiced black and white quality of his prints but reference their graphic linear and formal vocabulary in a part conspicuous, part subtle manner. They reflect the artist’s fervent attempt to fathom the possibilities of painting as a further dimension of expression.
Scharpf already donated a major portion of his artistic oeuvre to the city of Ludwigshafen during his lifetime. He bequeathed a further part of it in his will. Regular special exhibitions exploring aspects of his artistic legacy are shown in the Rudolf-Scharpf-Galerie.

Opening on 4 June 2020, 6 p.m. in the Rudolf-Scharpf-Galerie-Galerie
Curator: Susanne Ecker 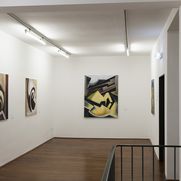 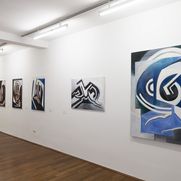