Image and Sight – Seeing in Modernism

“The viewer is in the picture” – this formulation coined by the art historian Wolfgang Kemp indicates that the artist considers the viewer in the conception of his work and thus determines his standpoint before the picture. The path of abstraction in the 20th century is accompanied by a concentration on painterly means as well as the handling of the surface of the canvas. It poses the question concerning the impact of foregoing figurative and narrative elements on the perception of the picture. What role is assigned to the viewer when the canvas no longer functions as the ‘open window’ (‘una finestra aperta’) described by the Italian artist and writer Leon Battista Alberti?

For the viewer, focusing on the surface of the canvas – and thus on painting itself – gives rise to varied possibilities. While the strict geometrical areas cast the viewer’s gaze back to his own realm of reality, gestural techniques like those employed by Jackson Pollock generate the illusion of a space behind the canvas. White paintings, which simulate infinity as a targeted depiction of nothingness, have similar effects. Rhythmic structures, by contrast, fix the viewers gaze on the surface of the canvas. Beginning in the 1960s, artists invited the viewer to enter into a direct if not even physical interaction with the work of art. 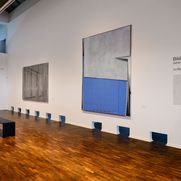 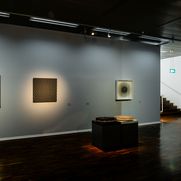 The free booklet on the presentation clearly explains the different chapters of the exhibition as well as the works. Available at the museum box office.