In the 1960s and 1970s, artists like Joseph Beuys, George Brecht, Robert Filliou and Mieko Shiomi refocused attention from the artwork itself to the processes involved in its production. This process was no longer a means to an end but attained an autonomous significance and was often intended to be completed by the viewers themselves. Concepts, ideas and instructions became primary artistic materials. 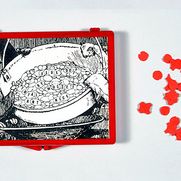