From 1970 to his early death in 1977, the artist Blinky Palermo (1943–1977) produced an extensive oeuvre of prints. As opposed to his artist colleagues and close friends Imi Knoebel, Gerhard Richter and Sigmar Polke, Palermo was an ‘artist’s artist’ whose works were especially admired by members of his own profession, but were otherwise little known to a larger public. The cabinet exhibition ‘Blinky Palermo – An Avant-garde Provocation’ presents a comprehensive look at his printed oeuvre based on the presentation of 26 albums and individual prints from a private collection in Wiesbaden. In the fall of 1969, the Munich art dealer Fred Jahn approached Palermo with the idea of publishing an album of prints. The artist overcame his initial scepticism and produced four silk-screens titled ‘4 Prototypes’ (1970). Taking recourse to forms he developed in conjunction with other works, they depict a blue triangle, a round grey shape, a black square and a green triangle, respectively. He transferred, for example, the famous blue triangle to a clamping plate and published it as a multiple in 1969. He subsequently issued it as a stencil in an edition of 50, which was to be applied over a door and painted in blue Plaka paint. A student of Joseph Beuys at Düsseldorf’s Art Academy from 1964 to 1967, Palermo did not comprehend his motifs as finalised when a work was completed. He argued instead that new materials, techniques and contexts led to the transformation of a motif in terms of form and content. Palermo accordingly made repeated use of his motifs in paintings, murals and works on paper. 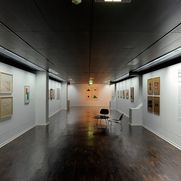 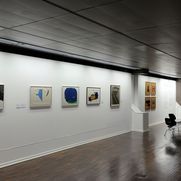 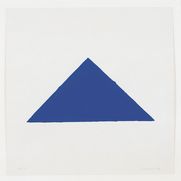