The portrayal of bodies is as old as art itself. Body images serve as contemporary witnesses in religious settings, as well as in ruler portraits and history painting.

They discuss and convey diverse views from their particular eras, such as gender roles or beauty standards. The body is also utilized to disrupt customs simultaneously. Until the end of the 19th century, the body has remained intact, whereas modernity began to tear it apart more and more. Concentrating  more on objectification using geometric shapes than on individual representation. Surrealism, however, deconstructs the body in order to take into account more subjective elements. His significance has changed since the second half of the 20th century: He progresses from being merely a representation to becoming a vital member of the artistic process. By capturing movements as an abstract gesture right on the canvas, the body becomes the instrument of expression. He achieves new prominence not just in painting, but also in performance and conceptual art.  He is pushed to his limits during this process. The audience also takes on a new role by abandoning its passive attitude toward the work and beginning to actively participate. In order to complete the art piece, it is therefore necessary to follow generally daily instructions or participate in a happening.

The exhibition is accompanied by a booklet, a booklet in simple language as well as a special edition of the literary magazine WORTSCHAU. Our app includes an audio tour in addition to these individual offers. 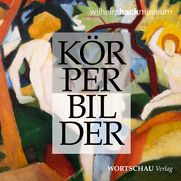