The connection between art and the banality of everyday life is characteristic of two artistic currents that emerged in Europe and the United States in the early 1960s: Nouveau Réalisme and Fluxus. The group of the Nouveaux Réalistes was formed with the signing of a manifesto composed by Pierre Restany in 1960 that demanded an uncompromising turn to reality. Its members included Arman and Daniel Spoerri, who lent permanence to so-called objets trouvés and fleeting everyday situations. The Fluxus movement was founded in 1962 in New York at the initiative of George Maciunas and its protagonists likewise focused on the fleetingness of life. Accordingly, many Fluxus works involves actions and performances, only the accompanying relics or instructions of which have survived. The Rhineland was one of the centres of the European Fluxus movement, where artists such as Mary Bauermeister, Joseph Beuys, Wolf Vostell, Dieter Roth and Robert Filliou were active. Numerous multiples by Fluxus artists, for example objects, prints, artists’ books and gramophone records awoke Heinz Beck’s interest in collecting. 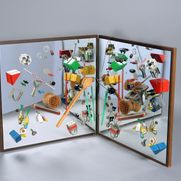